Photo by Alex Stevens (2004), courtesy Delores Tousinau.
Caleb/2a Brooks was born circa 1632, probably in England. (He was 51 in a 1684 deposition, and 64 at his death per g.s.)2 Admitted a freeman of Concord, Massachusetts, 3 May 1654.3 There he married (1), 10 Apr 1660, Susanna/2 Atkinson of Concord, daughter of Thomas/1 Atkinson and Susanna (–?–).4,5 In 1666 he owned 12 lots comprising 150 acres in the East District, taxes on which were abated in full that year.6
Caleb's father Thomas Brooks died at Concord, intestate, 21 May 1667. The male heirs—three sons and son-in-law Timothy Wheeler—presented an inventory of the estate for probate 16 Jun 1667, and the following day signed an agreement for division of the estate. Caleb's brother Joshua, as eldest son, was to have a double portion, the usual custom.

Whereas Thomas Brooks, of Concord, hath left an estate, and the sonnes of the said Thomas not willing to troable the Court have Joyntly agreed that it shall be divided as followeth. First That the Inventory taken by Deacon Mirriam, Deacon Potter, and George Wheeler shall be accounted the full estate of Thomas Brooks. 2ly. wee do agree that Joshua Brooks shall have a full double portion out of the lands at Meadford, and the 3: other sonnes, Capt. Timothy Wheeler, Caleb Brookes, and Gershom Brookes to have equall portions, only Caleb and Gershom are to have the remainder of the said land after Joshua is first accomodated as a part of their portion, and Timothy Wheeler out of the moveable estate, and all to be distributed to them by those 3. partyes that tooke the Inventory; unto whose finall determination we do severally bynd ourselves in a bond of 100£ apeece, to stand unto, as wee do witness by setting of our hands to this present writeing, the 17th of June. 1667.
In the presence of us. Hugh Mason, Joseph Estabrookes.
Timothy Wheeler, Joshua Brookes, Caleb Brookes, Gershom Brookes.7,8

His father's inventory included "a debt Caleb Brooke to pay out of the Mill at winottimie" [Menotomy, the early name for present-day Arlington] of £80.9,8
"He lived in Concord until 1680, when he moved to Medford, and occupied most of the land purchased by his father, and supposed to have been sold to him by his brother Joshua," say Bond." Shattuck records the date of the move as 1670, a decade earlier.10,11
Susannah (Atkinson) Brooks died at Concord 19 Jan 1668/69, a month after giving birth to their fifth daughter, a. 2712, and he married (2), circa 1670, her sister Hannah/2 Atkinson.5,13 "He removed to Medford," says Charles Brooks, "where he inherited some land lying east from the Wear [Weir] Bridge. His house was situated about midway between the bridge and the Lowell Railroad, immediately in front of the Woburn Road. It was torn down in 1779, by his great-grandson, Samuel."14
In the will of Timothy Wheeler, made 1 Mar 1686/7, Mr. James Minot, brother Caleb Brooks, and nephew Sergeant Wheeler were named to see the will duly performed.15,16 Caleb was named sole executor and left £5 in the will of his sister Mary (Brooks) Wheeler, dated 20 Apr 1691.16
He died at Medford 29 Jul 1696, a. 64 (g.s.); Hannah died there 10 Mar 1708/9.13,17 They are buried in Salem St. Cemetery, where their beautifully carved gravestones, inscribed with elaborate skull and hourglass motifs, are wonderfully preserved.13
His estate was probated in Aug 1696. By a settlement agreement signed by the widow and children, Hannah was to have a third of the personal estate forever, and a third of the income of the real estate during her life. Son Ebenezer to have 30 acres of land, the house his father died in, two thirds of the utensils of husbandry, and two thirds of the household stuff after his mother has had her third, and half the rest of the lands. Son Samuel to have the household he then possessed, half of all the lands except the 30 acres given to Ebenezer, a third of the utensils of husbandry, and a third of the household stuff after his mother has had her third. Ebenezer and Samuel to split the corn and cattle, their father's debts and the funeral charges. Son-in-law Nathaniel Ball and Mary his wife to have £110 in money. Daughter Sarah to have £80 in money and a convenient room in the house her father died in as long as she remains single. Daughter Rebecca, not being capable to act for herself, as is represented for want of understanding, her two brothers Ebenezer and Samuel gave bond for her care, and to take her estate into their hands.18
The inventory of Caleb's estate amounted to £6,300-14s., a considerable fortune for those days. Administration was granted 29 Aug 1696 to his sons Ebenezer and Samuel; the subsequent settlement of the estate was signed by widow Hannah, sons Ebenezer, Samuel, son-in-law Nathaniel Ball, and daughter Sarah. Much of the estate in Medford was given or sold by subsequent generations of descendants to the town (now city); the land on which the modern Oak Grove Cemetery lies, for example, was part of the original estate. The 82.5 acres remaining today, known as the Brooks Estate, is owned by the City of Medford.19 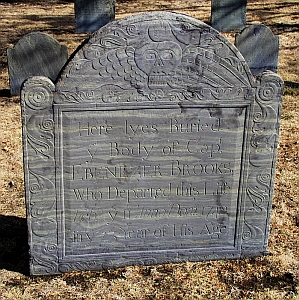 Photo by Alex Stevens (2004), courtesy Delores Tousinau.
Capt. Ebenezer/3a Brooks was born at Concord, Massachusetts, 21 Feb 1667, according to the town record, but this date is problematical, occuring barely 10 months after the birth of his sister Mary on 3 Apr 1666. Threlfall gives 21 Feb 1670/71, but does not note his source; James Emery Brooks gives 24 Feb 1670, also with no source (but following Charles Brooks, Hist. Medford, 507).2,3 Ebenezer Brooks was left 20s. in the will of his aunt Mary/2a Brooks, 20 Apr 16914, and married, 1693, probably at Charlestown, Abigail/3 Boylston, daughter of Dr. Thomas/2 Boylston and Mary Gardner.5,6,7 (Their siblings Capt. Samuel Brooks and Sarah Boylston also married.)
After his father Caleb's death on 29 Jul 1696, Ebenezer and his brother Samuel signed the subsequent settlement as administrators of the estate. Ebenezer's share included 30 acres of land and the house that his father died in at Medford, where he subsequently lived.8 Ebenezer Brooks joined the church at Medford, Feb. 1712. His wife Abigail and her sister Sarah, the wife of Ebenezer's brother Samuel Brooks, came from the church at Cambridge in 1713.9
Wyman details Ebenezer's extensive estate at 1:132.10 A record in the probate file of Henry Ewers, dated 9 Sep 1726, states that Samuel Merriam and Ebenezer Brooks, uncles to the widow Susanna, have been appointed guardians of Henry's children.11
Ebenezer Brooks died at Medford, a wealthy man, 11 Feb 1742/43, "73d Year" (g.s.)12 Thomas Secomb recorded in his journal, 13 Feb 1742/43, "Capt. Ebenezer Brooks died last Fryday about sundown. He was well at Lecture the same week on Wednesday."13 Appraisal and division of Ebenezer's estate was dated 18 Apr 1743, his real estate amounting to £5644-10-0. By the settlement, signed by all the sons and the daughters' husbands, Thomas and Samuel had the homestead. Thomas, Samuel, Ebenezer and Caleb had all the real estate, and agreed to pay Ebenezer £600-1-3 to complete his share, to the heirs of Abigail Oakes £705-11-3, to sister Hannah Cheever £705-6-3, and to sister Rebecca £705-11-2.14
Ebenezer's widow Abigail died 23 May 1756, a. 81.15 They are buried in Salem Street Cemetery, Medford.16,17

Her brother Peter Boylston was grandfather to President John Adams. 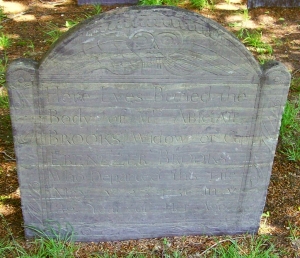