"Lieut. in Company which marched from Concord to Boston on the alarm of an expected attack by a French fleet, 1746."2 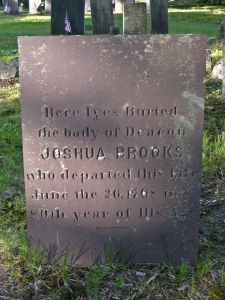 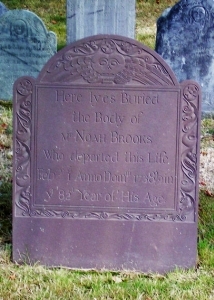 Noah/3a Brooks was born in 1656 or 57 at Concord, Massachusetts, although no birth record survives.2,3 A witness to an Indian deed, 16844, he married, probably in 1685, Dorothy/2 Potter of Concord, daughter of Dea. Luke/1 Potter and Mary/2 Edmunds.5,6,7 In 1697 Noah was guardian of his younger brother Hugh.8
Noah Brooks was selectman in 1702, 1704 and 1709.9
In 1735 a group of Concord residents led by John Flint petitioned the General Court for a new town to be set off from the easterly part of Concord, the northerly part of Weston, and the westerly part of Lexington. Noah Brooks, a resident of East Concord, was, with his brothers and sister Esther, among those signing a petition opposing the request. Their opposition was unsuccessful, and the new town of Acton was created 3 Jul 1735 from "The Village, or New Grant, Together with Willard's Farms" sections of Concord.10 Since Noah's farm was included in the setoff, he thus became a resident of Acton.4 There he died 1 Feb 1738/39, "in ye 83rd year of his age."11 His widow died (c.r.) 15 Mar 1752.12
"Their grave stones are still extant in the old Hill cemetery [in Concord] though all that is left of his is the bottom part with his age," Threlfall reported in 1977.13,6 Noah's original stone was replaced with an historically accurate replica in 2002 by his 9th-generation descendants.14,15,16 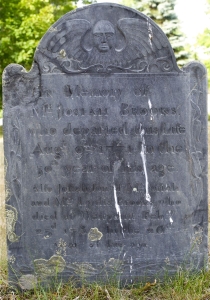 Signature of Daniel Brooks from his will.

Ens. Daniel/3a Brooks, born 15 Nov 1663 at Concord, Massachusetts,1, there married, 9 Aug 1692, Anna/3 Merriam of Concord, daughter of John/2 Merriam and Mary/2 Cooper, with whom he had 6 children.2 (Daniel's brother Joseph Brooks married Abigail Bateman, Anna's 2nd cousin.)
11 Nov 1695, with consent of his wife, Daniel's father Joshua sold his Concord lands by four deeds to his sons. Each deed described several parcels, all of which were in the same area and were bound by lands of these four brothers. Joshua and his wife Hannah both signed by mark. Daniel paid £59 for his parcel, says Threlfall.3 Two years later, 24 Aug 1697, Daniel, his brothers, and his brothers-in-law sold their rights in their deceased brother Job's portion of their father's estate to their brother Hugh.4
"His home on Brooks Road, [in that part of Concord which became] Lincoln, Mass., is now [1986] owned by David Rogers, who is a lineal descendant."5
Daniel Brooks, yeoman of Concord, made his will 6 Jan 1728/29. To beloved wife Anna he leaves a room in his house, cellar storage space, all his household goods, and two cows to be kept for her from year to year; and charges sons Samuel and Job, named executors, with keeping their mother supplied with meal, beef, pork and firewood, "all those things to be Brought to the house and Delivered to her in the proper season thereof," so long as she remains his widow. To youngest son John he leaves housing and lands bought of [Daniel] Hubbard besides what I have given him already in a deed of gift. To daughters Anna Jones and Mary Wheeler he leaves £70 each, less the £50 each has already received. To son Samuel, all my buildings except the lower room at the east end of my dwelling house (reserved for the widow); my home feild, barn, pastuer, and orchard, half the house meadow and the spring of water thereon; all my woodland by Chestnut feild; and all my Stock of Creatuers and Utencils for husbandary. To son Job, the Chestnut feild Pastuer, a woodlot purchased of Abraham Wood, and the other half of the house lot meadow. "With the upland Belonging thereunto which medow is to be equally divided between my two sons Samuel Brooks and Job Brooks in Quantity and Quality the one to Divide the other to Chuse and in case Jobs part shall be next to his uncle [Joseph] Brooks land he shall have the priviledge of a Bridle-way one Rod wide to his medow from the high-way to his medow." Any residue was to be equally divided between the executors. Witnesses: Joseph and Sarah Meriam and Joseph Morgain.6
Daniel Brooks died at Concord 18 Oct 1733, a. 697, and is interred in the Hill Burying Ground next to his brother Hugh.8,9,10 His will was proved 29 Oct 1733, and sons Samuel and Job Brooks named executors.6 His widow died at Concord 24 Jan 1757, a. 87.11
His trainband rank of ensign is known from his gravestone, where he is so titled.9
In 1938 the Historic American Buildings Survey conducted by the National Park Service made both photographs and measured drawings of the "Daniel Brooks House," on Brooks Road, Lincoln.