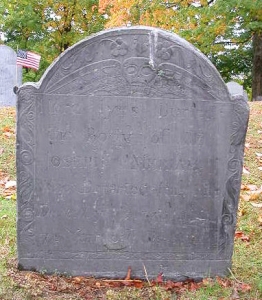 Joseph/3 Merriam was born 20 Aug 1677 at Concord, Massachusetts,1, where he married, as her 1st husband, 24 Mar 1705, Dorothy/4a Brooks of Concord, daughter of Noah/3a Brooks and Dorothy/2 Potter.2 There he died 10 Dec 1750, a. 73.3 His widow married (2), 1751, John/3 Hunt of Concord4, and died 28 May 1774 (g.s.), a. 88.5 Joseph is interred with her in the Hill Burying Ground, Concord.6,7
19 Mar 1727, Joseph Merriam joined other men in purchasing Hasanamisco (the future town of Grafton) from the Indians. He transferred his rights to his eldest son Joseph, who went to Grafton and grew up with the town.8
"He was a locksmith; resided in Concord. Joseph and Ebenezer Meriam, of Concord, joined, June 9, 1726, with James Taylor in a quitclaim deed of their rights of inheritance in lands which had been owned by the late James Taylor, and which Nathaniel Stow was then conveying. [Mdx. Deeds, 26, 47.] Joseph sold a freehold right and one-third of an acre of land in the Village or Town New Grant contained by Stow line, and other lands, June 5, 1732. He made deeds of gift to his sons: to Nathan the homestead, April 3, 1747; to Josiah other lands; also gave the latter life use of one-half of the shop and tools,— but Josiah must give first offer of sale to his brother Nathan if he desired to sell."8

The inscribed date of death is incorrect, as his will was proved two weeks earlier. Courtesy Farber Gravestone Collection.
Ebenezer/4a Brooks was born 14 Feb 1691/92 at Concord, Massachusetts,1, where he married, 18 Nov 1714, Sarah/4 Fletcher of Concord, daughter of Cornet Samuel/3 Fletcher and Elizabeth/3 Wheeler.2 "He was a weaver and a farmer, owned a large number of cattle which he or his sons drove from Concord to Grafton for pasturage in the spring and back to Concord in the fall."3
28 Nov 1741, a request was sent to the General Court, and subsequently granted, that land owned by the petitioners be voted off from Shrewsbury and annexed to Grafton, as the distance was too great to attend divine worship. This petition was signed by Ebenezer Cutler, Obadiah Newton, Noah Brooks, David Reed, inhabitants of Shrewsbury; Amos Davis, Sutton, Thomas Pratt, Joseph Willard., Chas. Brigham, Abner Stowe, selectmen of Grafton: Joseph Willard, Aaron Hardy, Ebenezer Brooks of Grafton, owners of the land.3,4
A selectman at Grafton, 1742, 1743, 1753 and '54, and town treasurer 1745-17545,6, Ebenezer died there 5 Apr 1768 (g.s.), a. 76.7
His will, dated 16 Dec 1767 and proved 25 Apr following, devises to wife Sarah the north end of my new dwelling house with as much cellar room as she may need during her natural Life, all his indoor moveables, and her choice of two cows; to eldest son Noah, the northerly half of a Lott of Land Lying in a Swamp called Wild [Catt?], and £10-11-8; to 2d son Joel, £13-6-8 and a horse; to son Simon, £13-6-8; to daughter Sarah Willard the east end of a house at Grafton purchased of her husband Benjamin Willard, a right-of-way, and one third of the indoor moveables after his wife's decease; to daughters Elizabeth Drury and Lucy Goulding, each ten pounds and one third of the indoor moveables after his wife's decease; to son Peter, his outdoor moveables, farm and buildings thereon (excepting the half of the house already devised to his wife during his lifetime), in exchange for life care and burial of his wife; to sons Noah, Joel and Simon, the remainder of property purchased of son-in-law Benjamin Willard 7 Oct 1766. Witnesses included his 2nd cousin Nathaniel/5a Ball of Grafton. Ebenezer's son Noah, named executor of the will, "utterly refused" his role on 6 Apr 1768, and the court appointed his brother Peter executor in his stead on the 26th.8
Ebenezer's widow Sarah died 22 Feb 1775, a. 84.9 They are buried in Oak Street Burial Ground.10,11 Of their eight children, two married Willard siblings and two married Drury siblings.

Ebenezer Brooks built the first frame house in this part of the town. He chose the site where the old farmhouse now [1929] stands on that part of the State Hospital property now known as 'The Oaks', so named for the large oak trees growing there. By the same token it might have been called 'The Butternuts', 'The Elms', or 'The Chestnuts' for these were as numerous and beautiful as well as comparing favorable in size. The largest chestnut, when cut a few years ago, measuring between 8 and 9 feet at the swell of the stump and the trunk proper 6½ by 7½ feet in diameter. Unfortunately all the chestnuts have been killed by the blight but the others still stand. The house consisted of three rooms, two on the ground floor and a Chamber above. The kitchen was large and long with a stone chimney and fireplace so big you could sit on a cricket in one corner and look at the stars. The old flint lock and powder horn hung over it. On the floor were marks of horses' feet where they had drawn in the big back log for the foundation of the fire never allowed to go out. Once this accident happened and a member of the family took the foot stove used for keeping the feet warm in church and went down the long hill to the Cutler Farm for coals.12

Ebenezer Brooks, of Concord, came to this town in its early settlement. He located on land now [1879] owned by his descendant, Samuel H. Knowlton. He erected a small house and blacksmith shop. This property was subsequently owned by his son Joel, his son Elijah, his daughter Polly, who married Joel Knowlton; and their son was Elijah Brooks Knowlton, father of the present owner. The black smith shop was burned in 1859. A portion of the old house is still standing, to which a large addition has been added.13 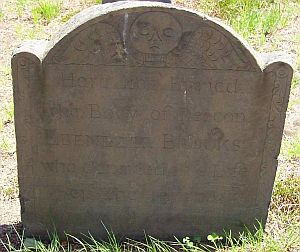 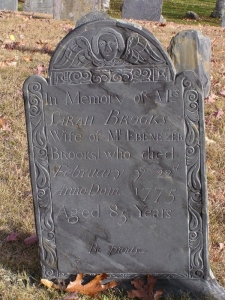