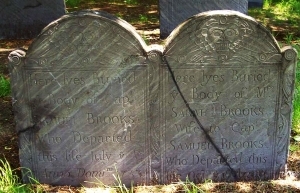 Findagrave.com, memorial #26920725. Photo by BobBoston.
Capt. Samuel/3a Brooks, born 1 Sep 1672 at Concord, Massachusetts,1, was left 20s. in the will of his aunt Mary/2a Brooks, 20 Apr 1691.2 After his father Caleb's death on 29 Jul 1696, Samuel and his brother Ebenezer signed the subsequent settlement as administrators of the estate. "He inherited nearly one half of his father's property in Medford. His house was on the east side of the road to Woburn, and nearly opposite that of his descendant the late Peter C. Brooks."3 He married, by 1701, perhaps at Charlestown, Sarah/3 Boylston, daughter of Dr. Thomas/2 Boylston and Mary Gardner, with whom he had 2 children.4,5 (Their siblings Capt. Ebenezer Brooks and Abigail Boylston also married.)
Samuel signed the church covenant at Medford with his brother Ebenezer in 1712. The following year, his wife Sarah and her sister Abigail were dismissed from the church at Cambridge to Medford.6 Samuel died at Medford 3 Jul 1733, a. 60.7
"By his Will," says Bond, "dated Feb. 20, 1733, he gave to his wife Sarah one-half the dwelling-house, barn, and calash-house, his Negro man, Bristow, the furniture and one tankard during her life, one-third the horse-cart, and one-third part of the farming utensils. To his dr. Sarah one-half the dwelling-house and barn, one horse, two cows, and five sheep, and tankard after her mother's decease, one third part the silver money, one-third the cattle and swine, and one-third the articles of husbandry. To son Samuel, the house in which he dwells, and the barn, one suit wearing apparel, boot lashes and silver buckles, one-third the silver money, silver-hilted sword and pistols, best saddle and housing, and Negro man named Boston, and one third part the cattle and swine."8 His inventory, dated 15 Mar 1733/34, valued his real estate in Medford, Concord and Charlestown at £2,857. Son Samuel was executor, and by the settlement dated 21 Jan 1734/5, was to pay the widow Sarah £541-13-0.9
Samuel's widow Sarah died at Medford 16 Oct 1736, a. 55.10 They are buried in Salem Street Cemetery.11
He left, in Savage's words. "gd. est. in lds," of which Wyman itemizes: 20 acres woods. 4 acres salt marsh. 6½ acres Labor-in-vain point—N & SE, Medford river; W, Royal's marsh. 13 acres—W, E. Turell; E, Waters lot; N & S, ranges. 7 acres—N, Woburn line; S, E. Thompson; W, Joseph Francis; E, Capt. Brooks.12,13

His wife was the 2nd great grand-aunt of President James A. Garfield, making their children 1st cousins three times removed of the President.

Samuel/4a Brooks, born 8 Feb 1709/10 at Medford, Massachusetts,1, "Inherited jointly with his brother [Thomas] the homestead and buildings of his father, and of his grandfather Caleb," where he lived all his life.2 In the settlement of his father's estate, 1743, Samuel and his brother Thomas had the homestead, and, with their brothers Caleb and Ebenezer, all of the considerable real estate.3 He married, 2 Apr 1747 at Waltham, Abigail/4 Hastings, daughter of Samuel/3 Hastings and Bethiah ?Holloway.4,5 At a Medford town meeting, 13 May 1761, Samuel Brooks Esqr and Simon Tufts Gentleman were two of six Medford residents chosen a committee to negotiate an agreement with other towns in the region to share maintenance costs of Mistick Bridge.6
He died at Medford 22 Sep 1766, a. 56.7 Administration of his will was granted 11 Nov 1766 to his widow.2,8 The most valuable item in his inventory was "an old negro man Punch, £2.0.0."9 Widow Abigail Brooks died at Medford 14 Apr 1777.10 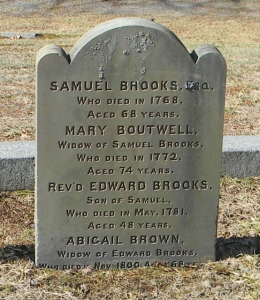