William's truly noteworthy involvement with the judicial system occurred five years earlier, when he was a juror in the trial of several Indians accused of the murder of John Sassamon, a Christianized Indian and one-time "counselor" to Metacom, sachem of the Pokaneket band of Wampanoags (known to the English as "King Philip").1

William/1p Brooks was born in England about 1615, perhaps in Essex.2,3 William Brooke, 20, and Gilbert Brooke, 14, were enrolled at London, 17 Jun 1635, for passage to New England on the Blessing, John Leicester, master, as servants in the party of William/1 Vassall, a wealthy merchant of Stepney, Middlesex and son of a London alderman. They arrived at Boston in August, and thence went with Vassall to Scituate, in Plymouth Colony.4,5,6,7 Vassall left for England in 1646, and thence for Barbados, 1648, where he died in 1655. The name of William Brooks, Marshfield, was included on a 1643 list of men able to bear arms in Plymouth Colony.3,8
According to Savage and Deane, he married (1), by 1644, the widow Susanna Dunham, but no such person is found in Plymouth colony records. Torrey alludes to an unidentified 1st wife while naming William's 2nd wife. The Great Migration team says he married "(1) By 1644 — —; she died after 1659 and by 1665." This unidentified 1st wife was the mother of William's 8 children.9,10,11,3
3 Mar 1644[/5?], Willm Brookes acted as agent for Manasseh Kempton in the sale of land in Scituate, with Gilbert Brooke as witness.3 Plymouth grand juror, 5 Jun 1644; Plymouth grand and petit juror, 1 Jun 1675.3 "He or his wife had become a member of the Second Church at Scituate by 14 September 1645 (even though they were residents of Marshfield at this time), when their first child was baptized."3 3 Mar 1645/6, Willm Brookes of Marshfeild was presented to the court "for the breach of his oath, in disclosing of his fellows' counsel and his own, which he through weakness confesseth he did, and is released."3
30 (9) 1649, Maj. William Homes of Scituate left the widow and children of his late brother Thomas, all of London, "if they come over," his farm at Scituate, "now or lately in the possession of William Brooke."12
With Walter Woodward, William Brooks returned the inventory of Thomas Hicke of Scituate, attested by the widow 3 Oct 1653. With James Torrey and John Bryant, he returned the inventory, 10 Apr 1657, of Widow Kempton of Scituate.13
William Brooks returned by 1657 to Scituate, where he took the oath of fidelity that year. Admitted freeman 1 Jun 1658, he was recorded in the Scituate section of Plymouth Colony lists of freemen dated 1658 and 29 May 1670.3 Says Deane, "His farm was south of Till's creek, latterly called Dwelley's creek, and his house near that of Capt. William Brooks, his descendant of the sixth generation. The spot seems to have been selected on account of the sweet spring of water near it." Evelyn Beran says the house was near the spring in today's Riverdale Farm pasture. Steve Ivas wrote in 1999, "[He] purchased a property along the North River about two miles from where I type."14,15 He had a proportional share of eight in a list, 1673, of "allowed and approved inhabitants of the Town of Sittuate … to whom division of land and a common privilege does appertain," and was granted five acres "in a swamp near the land called Spring Swamp."16,3 Named in the will of Thomas Bird of Scituate, dated 4 Feb 1663.17
William married (2), by 1665, Susanna Hanford, daughter of Jeffrey Hanford and Eglin Hatherly, and widow of John Whiston, with whom she had had 6 children.18,19 12 Dec 1664, Susanna and her children received £12 and a heifer in the will of her uncle Timothy Hatherly of Scituate, who added, "I acquitt her of her first husband's debt to mee." 18 Feb 1666/7, William and Susannah Brookes gave a receipt to Joseph Tilden, administrator of the estate, for their share.19,20
In 1665 "father-in-law" (stepfather) William Brooks and uncle Edward Jenkins (husband of Susannah's sister Lettice Hanford) assisted Joseph Whiston (eldest son and heir of John Whiston) in settling some of the realty of his father's estate. Joseph died in 1666, and Edward Jenkins was appointed guardian of John Whiston, Joseph's younger brother.21
7 July 1680, William Brooks testified in Plymouth Court in a case involving Zachariah Damon and his mother.3

~~~~~~~~~~~~~~~~~~~~~~~~~~~~~~~~~~~~~~~~
William's truly noteworthy involvement with the judicial system occurred five years earlier, when he was a juror in the trial of several Indians accused of the murder of John Sassamon, a Christianized Indian and one-time "counselor" to Metacom, sachem of the Pokaneket band of Wampanoags (known to the English as "King Philip"). Sassamon had informed the English about growing sentiment among the Wampanoags for war against the English, and his life became forfeit when this fact became known to the Wampanoags. The Indians accused of his murder pleaded not guilty, after which "itt was judged very expedient by the Court, that, together with this English jury aboue named, some of the most indifferentest, grauest and sage Indians should be admitted to be with the said jury, and to healp to consult and aduice with, of, and concerning the premises." The racially mixed jury returned a unanimous verdict of guilty, and the prisoners were executed by hanging.
"At this time there was a superstitious belief, that if one person had killed another, the body of the one killed would immediately begin to bleed if approached by the perpetrator of the murder. In the case of the murdered Sassamon this test was tried, and, says Dr. Increase Mather, 'when Tobias, the suspected murderer, came near the dead body, it fell a bleeding on fresh, as if it had been newly slain; albeit, it was buried a considerable time before that.'"
The murder of Sassamon, which occurred during the winter of 1674-75, and the subsequent execution of the Indians adjudged guilty of it, helped to precipitate the disastrous conflict known as King Philip's War which broke out the following spring.1 Despite his advanced age of about 60 years, William Brooks subsequently took the field against the Indians with Capt. Mosely's independent company, being paid £2-5-0 on 21 Sep 1675 for service during June and July. William Brooks was also paid £2-3-0 on 27 Aug 1675 for service under Prentice in the Mt. Hope campaign. Of the latter service Bodge notes, "Several are credited as 'guards,' and may have been in service as scouts and guides."22
~~~~~~~~~~~~~~~~~~~~~~~~~~~~~~~~~~~~~~~~

The inventory of William Brooks, 24 Jan 1682/83, amounted to £59-19-8, including "his apparel and books" valued at £6-6-6. The only real estate listed (not valued) was "1 tenement of one house & barn with 60 acres of upland & eight acres of marsh belonging to it."3 His undated will, signed by mark and proved 6 Mar 1682/3, bequeaths to son Nathaniell half my upland and half my meadow land, also half the upland which is on the island within the meadow and half the fruit of my orchard forever; to son Thomas the other half of my land & meadow with the housing thereon, with instructions for providing for the testator during his life, but if Thomas die without issue, this land to return to Nathaniell, who shall pay to each of his six sisters or their children £12-40. Wife Sussannah shall live in my house during her widowhood, with provision for her maintenance by Nathaniel and Thomas, and with a bequest of some moveables and of all those things which she brought with her when she became my wife; "my grandchild Beriah shall be at my wife's dispose"; to wife's youngest daughter Bathshebah Dunham 40s; the residue of the estate to be divided amongst my six daughters, only my grandchild Beriah, my daughter Hannah and my daughter Mary forty shillings apiece more than the rest. Eldest son Nathaniell was named executor, and Cornet Robert Studson and Charles Stockbridge Sr. overseers.3
See The Great Migration, 1634–1635, 1:412–15.3

In 1675, during Philip's War, he kept a garrison at Gov. Josiah Winslow's house in Marshfield, and is credited, 26 Jan 1676, in the amount of £3.14.10, on a list of men who made advances of money to the government to sustain the war effort. This probably represents reimburseable expenses incurred in maintaining the Winslow garrison.1,2 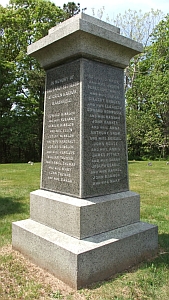