Capt. Richard Beers, who had served in the Pequot War in 1637 and been 31 years a selectman of Watertown, Massachusetts, is best remembered as the military commander of an expedition of 36 men and two oxen which attempted to evacuate the English settlement of Squakheag (Northfield) during Philip's War, but was ambushed and lost more than half its men, including its commander.1 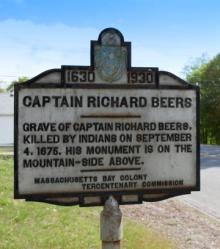 CAPTAIN RICHARD BEERS — Grave of Captain Richard Beers, killed by Indians on September 4, 1675. His monument is on the mountain-side above.
Capt. Richard/1 Beers was approved by the court as lieutenant of the Watertown trainband 5 Apr 1653.2 3 Oct 1654, the court licensed him to keep a house of public entertainment in Watertown.3 28 Dec 1658, Ephraim Child, Richard Beers and Priscilla Knapp were granted power of administration on the estate of William Knapp4, from which duty Child and Beers were discharged 16 Dec 1662, replaced in that role by John Coolidge and Henry Bright.5
See Hist. Northfield (1875), 70-80.1