"In 1690, at the age of about 67 years, he participated as a soldier in the Phips Expedition to Quebec."2

John Brooks, Francis Kendall, Samuel Walker Sr., John Wyman, and Thomas Pierce were appointed a committee of "wright proprietors," 28 Mar 1667, to proportionally distribute common land at Woburn. As compensation for "the truble and pains that they were at," each man was to receive 7 acres of "make meadow or swamp."9
Johnson tells us: "In 1668 Thomas Dutton [of Woburn] brought an action of slander against Michael Bacon Jr., who had charged him with being a thief…The following paper also appears as evidence in this case and is very valuable for its autographs: Wee whose Names are under written testyfy that Thomas dutton having lived amongst us in the Towne of woburne nere the space of tenne yeares, has bine very Industrus in his calling and and has not to our knowledg bine any way given to steall or to take any thing that is not his owne. Josias Conuars, William Johnson, Mathew Johnson, James Conuars, Samuell Conuars, John Broockes, Thomas Peirce, Samual Walker senyer, John Russell Junior, henry broockes, Isack Broockes, Edward win, Richard Gardner, John Russell Sen., John Carter. The plaintiff obtained a verdict of fifteen pounds.10,11
Says Cutter, "He was evidently a soldier in King Philip's War, 1675–6, but his identity is not positive." However, Bodge notes that Benja. Rollins, Ebenezer Watson and one John Brooks (otherwise unidentified) were claimants for a grant at Narragansett Township No. 1 (later Buxton, Maine) based on the war service of a Nicholas Rollins, suggesting that Cutter's claim was in error.2,12
4 Apr 1681, the selectmen agreed with John Brooks to keep George Wilkinson, a veteran of Philip's War and the town's first recorded pauper, until Michaelmas; "and in case more than ordinary sickness come, then the Towne to consider the charge." Wilkinson died in 1683, and was buried at the town's expense.13
His father Henry's will, 18 Jul 1682, forgave son John Brooks £10 owed for a yoke of oxen, and forgave a £50 note for land and housing in which John Brooks and his brother-in-law John Mousall were joint debtors. John also received one third of his father's wearing apparel, "but he hath had his portion already."14,15,16
John's wife Eunice died at Woburn 1 Jan 1683/8417, and there he married (2), seven weeks later, 25 Feb 1683/84, Mary Champney, daughter of John Champney and Joan (–?–), and widow of his stepbrother Theophilus Richardson.18
"The will of John Brooks, Sr., dated July 29, 1690, probated Nov. 16, 1691, he 'being bound for Canada in the Expedition against the French enemy' mentions wife, Mary; sons, Jabez, John and Ebenezer; daughters, Deborah, Eunice, Sarah and Joanna; grandchildren, Eunice Buck, Eunice Carter, Eunice Roberts, and John Buck, John Carter, John Brooks, David Roberts; and Mary and Elizabeth, his son John's two children; Eunice Brooks, daughter of his son Ebenezer; and Mary, daughter of his daughter, Deborah Richardson. He also names son John Richardson [husband of Deborah]; and mentions John Dane [Dean], an apprentice, and Rev. Pastor Mr. Jabez Fox. To son John Brooks he gives that piece of land … called by the name of English Hills. He gives the care of his son Jabez to Lieut. James Converse, during his minority."2
In September 1691, John Brooks was "dismissed from ordinary trainings on account of his decrepitness and incapacity to serve."19,2 He died at Woburn, "by inventory of will," 29 Sep 1691,20,21, and his widow 26 Aug 1704.22 In 1738 his grandson Jonathan filed a claim in right of John Brooks for bounty land awarded for the 1690 Canada Expedition.2 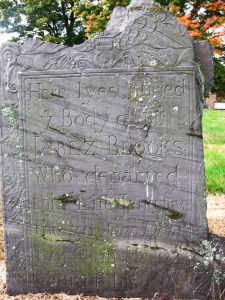