Stephen/2 Grover Jr., of Charlestown, Massachusetts, probably there married, 2 Jul 1705, Elizabeth/4w Bateman of Charlestown, daughter of Eleazer/3w Bateman and Elizabeth Wright.2,3,4 They removed with her father Eleazer to Killingly, Connecticut.1 19 Oct 1715, Stephen Grover and Eleazer Bateman were among 11 incorporators of the Killingly church.5 Stephen Grover died before his son Beriah's baptism at Killingly, 11 May 1730.6

His gravestone calls him "A Revolutionary Soldier."3 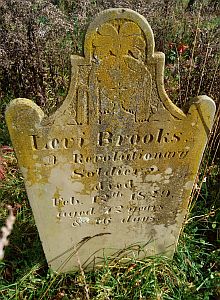 Findagrave.com, memorial #65652587. Photo by Eileen.
Pvt. Levi/5g Brooks was born circa 27 Jan 1757 (g.s.), probably at Glastonbury, Connecticut, although no town record is found.3 The name of Levi Brooks of Glastonbury is found with that of his cousin Elijah ("Elizur") on a list of men who marched from Connecticut "for the Relief of Boston in the Lexington Alarm," 19 Apr 1775, 4 days in service.3 Several weeks later, on May 8th, he and his brother Thomas enlisted as privates in Capt. John Chester's 9th company, Spencer's Connecticut Brigade of Continental troops, and served with that unit until discharged on 17 Dec.4
Spencer's 2nd Regiment was immediately posted at Roxbury as part of Washington's encirclement of the British inside Boston. It would seem logical to draw from these troops to reinforce the colonial position on Charlestown Neck on 17 Jun 1775, and family history says that both Levi and Thomas Brooks were at Bunker Hill on that day. The colony's official record says of the 2nd regiment as a whole, "Detachments of officers and men engaged at the battle of Bunker Hill."5,4
Connecticut state records also show that Levi and Thomas served as privates in Capt. Jonathan Hale's 6th company, Col. Erastus Wolcott's regiment of state troops in 1776. Initially engaged in the occupation of Boston after the British evacuation, they subsequently served various guard assignments on Connecticut's borders.6
Levi married, by 1778, Lydia/6 Buck, daughter of Pelatiah/5 Buck and Hannah Hills,7,2 owned the covenant 21 Feb 1779, and was admitted to communion with the church at Glastonbury.8
By 1788 the household had moved northward up the Connecticut River to that section of Greenfield, Massachusetts, which is now the town of Gill. Their 1790 census household at Greenfield included Levi, three males under 16 (sons Levi, Pelatiah and Bethuel), and four females (wife Lydia and daughters Hannah, Lydia and Polly).9 They ultimately settled at Plymouth, New York, near Norwich, where Lydia died 4 Jul 1806, a. 50.10
Mentioned in the will of his brother Thomas, 12 Sep 182211, Levi died 12 Feb 1829, a. 72-0-16.5,12 He and Lydia are buried in Aldrich Cemetery, Norwich.13
He has been sometimes confused with Pvt. Levi/6a Brooks, b. 1758, Westminster, Massachusetts, who was also a Revolutionary soldier but of the Concord Brooks line.