Smith also relates that Thomas Brooks participated in Shays' Rebellion, "a fact which he always admitted and justified."3 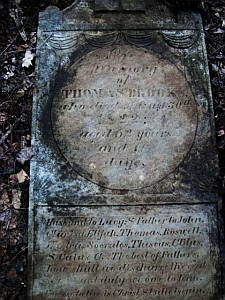 Findagrave.com, memorial #65245895. Photo by Larry Wales.
Thomas/5g Brooks Jr. was born circa 19 Aug 1760 (g.s.), probably at Glastonbury, Connecticut, though no birth record survives.4 On 8 May 1775, he and his brother Levi enlisted as privates in Capt. John Chester's 9th company, Spencer's Connecticut Brigade of Continental troops, and served with that unit until discharged on 17 Dec.5
Spencer's 2nd Regiment was immediately posted at Roxbury as part of Washington's encirclement of the British inside Boston. It would seem logical to draw from these troops to reinforce the colonial position on Charlestown Neck on 17 Jun 1775, and family history says that both Levi and Thomas Brooks were at Bunker Hill on that day. The colony's official record says of the 2nd regiment as a whole, "Detachments of officers and men engaged at the battle of Bunker Hill."6,5
Connecticut state records also show that Thomas and Levi served as privates in Capt. Jonathan Hale's 6th company, Col. Erastus Wolcott's regiment of state troops in 1776. Initially engaged in the occupation of Boston after the British evacuation, they subsequently served various guard assignments on Connecticut's borders.7
Thomas Brooks married, by 1778, Lucy/5g Brooks, daughter of Capt. John/4g Brooks and Mary Crofoot, and thus his 1st cousin.1,4
The baptismal record of his son John, 4 Jul 1778 at Glastonbury, notes that the child was sponsored by his mother alone, "the father being in the Army."8 Smith's Hist. Chenango and Madison Counties identifies him as a major of militia who played a critical role in the Mohawk Valley campaign of 1777. That this Maj. Thomas Brooks cannot be the same teenaged youth who served as a private the preceding year is manifest.9
About 1783 Thomas Brooks removed north to Franklin County, Massachusetts, where he is reported at Leyden in 1783.10,11 In 1788 he was at Deerfield, Massachusetts, "with wife Lucy and ch. Thomas, John, Elijah, Suretis, Thetis and Clarissa, but they soon disappear."12 The 1790 census at Deerfield reported a Thomas Brooks household with one adult male, six males under 16, and two females (wife Lucy and daughter Clarissa).13
Smith's Hist. Chenango & Madison Counties reports that Thomas Brooks settled about 1790/91 on the west green of what became Norwich, New York, on which he built "a log cabin without using either hammer or nails."14,15 He taught the first school at Plasterville or Sherburne Four Corners (North Norwich, first settled in 1794).16,17,3
In 1800 Thomas sold his Smyrna farm to Stephen Parker.18 They subsequently removed "to the south-east corner of South Plymouth, to the farm now [1880] occupied by Ambrose Bryant."19 At Plymouth's first town meeting, held 3 Mar 1807 at the house of Walter Bement, Thomas Brooks was chosen one of three tax assessors20, and six days later was elected a trustee of The Friends to Theological and Civil Society at their Plymouth organizing meeting, 9 Sep 1807.21
"Thomas is listed with his family in the 1810 and 1820 Plymouth census. He gradually acquired various land parcels and deeded some of them to his children. He purchased one lot in Plymouth from John Jacob Astor (1763-1848) on November 1, 1821 for $388. Astor, who made a fortune in fur trading and real estate, became the first US multimillionaire, and at the time of his death was estimated to be worth at least $20 million ($110 billion in 2006 US dollars)."11
Thomas died on his homestead 30 Aug 1822 (g.s.), "age 62 years and 11 days."21,4 His obituary, published in the Norwich Journal, 4 Sep 1822, relates:

On the afternoon of Friday last, Major Thomas Brooks of Plymouth, in this county, was killed by the fall of a tree. … He, one of his sons, and several others were felling trees for the purpose of clearing a piece of land. Two men were engaged in chopping a tree which was hollow. They gave notice of the fact, and cautioned the others to keep out of the way; but they did not move until the tree was about to fall. When the tree started, it appeared to be falling in the direction in which Major Brooks stood; he ran towards the south, and unfortunately the tree fell in the direction which he ran. For some reason unknown, when he had nearly cleared himself from the tree, having but about eight feet further to go to be beyond its reach, he stopped, turned and looked at it, and remained motionless, until the top struck him. The flesh was stripped from one side of his head, but the bone was not fractured. His shoulder and breast were very badly injured. He was taken up and carried into the nearest house, where he lived in great agony for about an hour and a half, and then yielded up his spirit to that God who gave it; and whose inscrutable, but righteous Providence, has called him from his friends and weeping family to an untimely grave. His funeral was attended by a large concourse of people. His funeral sermon was preached by the Rev. Mr. Stacy of Hamilton. Major Brooks was one of the few surviving patriots of the Revolution; and has always been respected by his fellow citizens as an industrious and worthy man.22

Thomas Brooks died intestate. Probate documents dated 12 Sep 1822 mention (brother) Levi and (son) Cassius C. Brooks. On 24 Sep 1822, wife Lucy was appointed administratrix of his estate, which was appraised by sons Clitus and Socrates. Lucy signed their three-page inventory, which included oxen yokes, a two-horse sleigh, cattle, horses, sheep and pigs as well as sheep wool, grain, potatoes, corn, oats, and hay.23 Lucy died at Plymouth 31 Dec 1827.24,4
They are buried in Stewart's Corners Cemetery, Plymouth, with several children (and a cenotaph for each remaining child).4 Thomas's gravestone is inscribed, Blessed are the dead who die in the Lord | In | Memory | of | THOMAS BROOKS | Who died August 30th | 1822: | aged 62 years | and 11 | days. | Husband to Lucy: & Father to John, | Clarisa, Elijah, Thomas, Roswell, | Electra, Socrates, Theseus, Clitus, | and Caius C. The best of Fathers, | how shall we discharge the grat- | itude and duty we owe to him. | For die to live is Christ & to die is gain.4
Smith also relates that Thomas Brooks participated in Shays' Rebellion, "a fact which he always admitted and justified."24 "Mr. Brooks specially prided himself on the classical nomenclature of his large family of sons — Cassius, Caius, Brutus, Marcus, Antony, Socrates, etc."25 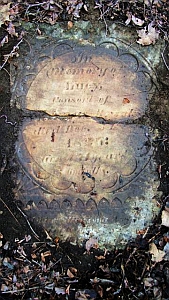 Findagrave.com, memorial #65195935. Photo by Larry Wales.
Lucy/5g Brooks, born 1 Jul 1754 at Glastonbury, Connecticut,1, married, by 1778, Thomas/5g Brooks, probably son of Thomas/4g Brooks and Susanna (?), and thus her 1st cousin.2,3 In 1788 he was at Deerfield, Massachusetts, "with wife Lucy and ch. Thomas, John, Elijah, Suretis, Thetis and Clarissa, but they soon disappear."4 The 1790 census at Deerfield reported a Thomas Brooks household with one adult male, six males under 16, and two females (wife Lucy and daughter Clarissa).5
Smith's Hist. Chenango & Madison Counties reports that Thomas Brooks settled about 1790/91 on the west green of what became Norwich, New York, on which he built "a log cabin without using either hammer or nails."6,7 They subsequently removed "to the south-east corner of South Plymouth, to the farm now [1880] occupied by Ambrose Bryant."8 There he was killed by a falling tree 30 Aug 1822.9,3 He died intestate, and Lucy was appointed administratrix of his estate, 24 Sep 1822.10 She died on their farm 31 Dec 1827, a. 73.11,3
They are buried in Stewart's Corners Cemetery, Plymouth, with several children (and a cenotaph for each remaining child).3 Her gravestone's inscription reads, My children dear come drop a tear | on your kind mother's grave | that ______ | your infant lives to save.3

F, #27019, (28 February 1780 - 1869)
Family Explorer
Clarissa/6g Brooks, baptised 28 Feb 1780 at Glastonbury, Connecticut,1, was at Deerfield, Massachusetts,with her parents, 1788.3 They settled about 1790/91 on the west green of what became Norwich village, Chenango County, New York4,5, and Clarissa taught the first school at Plymouth, New York, in 1800 or 1801. "The school-house in which she taught was a log structure, and stood a little below the store occupied [1880] by James B. Anthony. It was an uncouth structure and soon gave place to a more commodious one."6
Clarissa lived on the family homestead at South Plymouth, where she was recorded in 1860, keeping house for her widowed brother Caius, with real estate of $6,000 and personal estate of $500.7 "A teacher most of her life," she died on the homestead, unmarried, in 1869.8,9 Buried in Stewart's Corners Cemetery, Plymouth, with her parents and several siblings.10
The Syracuse Herald Journal, on 19 Oct 1952, published the following story, entitled "Beauty Gave Up Love to Teach.”

Clarissa Brooks, a surpassingly beautiful daughter of a Revolutionary major, gave up love, hope of a family, everything. In 1801, she was a grown girl, but had secured a fairly good education. There were a large number of families that had come to Chenango, and a still larger number of children. It was depressing to the educated Brooks family to see these children growing up unlettered. It was then that Clarissa made her decision. She would teach them.
She first taught in a small log schoolroom in 1801 and was still teaching in a larger wooden structure in 1845. She rode her horse to school each day from her father's house. At times, one of the Prentis boys would ride around and escort her home, and one day he told her of a farm he was about to buy. He was undecided on the purchase, he confided, until he knew whether the pretty teacher would be his wife and go with him to Georgetown. A bit sadly she later told the Prentis boy of her decision, and although he continued to press his suit, Clarissa always shook her head. She loved him, she admitted, but here were those children, waiting to be taught and with no one else to teach them. Were not there several lives of more importance than her own life?
Some time later a horseman rode to the school door and told the teacher that misfortune had struck her home. Her father, the major, had been killed in the woods that afternoon by a falling tree. School was dismissed and the young woman rode home to face the second great tragedy in her life.
Clarissa went to live with one of her brothers. The date of her retirement is unknown. When death came to her, her former pupils gathered in the old churchyard to hear the preacher tell the story of her usefulness to the community.11