Joseph/1 Merriam was born circa 1600 at Tonbridge, Kent.1 A clothier of Tonbridge, he married, circa 1622 at Tudeley, Kent, Sarah/1 Goldstone, daughter of John/a Goldstone and Frances Jefferie, with whom he had 7 children.1 Named as son, 8 Sep 1635, with brothers George and Robert, other siblings, and their children, in the will of William Merriam of Hadlowe, Kent, and bequeathed all such household stuff as I shall have at the time of my decease remaining, and all my lands and tenements in Yalding charged with the before mentioned annuity of three pounds.1 Named an executor in the will of his brother-in-law Robert Goldstone, 10 Apr 1637.1
As a clothier (merchant), he put his business experience and capital to work by joining with others to charter the Castle of London to convey them to New England, taking freight and passengers to help pay the expense of the voyage. They landed at Charlestown, Massachusetts, in July, 1638. As Pope notes, "The particulars of his venture are many of them brought out in connection with lawsuits between the partners." The passengers included Joseph's brothers George and Robert Merriam and their families. The Merriam families settled at Concord.1,2
Joseph Merriam was admitted a freeman of Concord 14 Mar 1638/39, the day after his brother Robert.3 There he died 1 Jan 1640/41. A son John was born posthumously.4 Joseph is interred in the Hill Burying Ground. Shattuck wrote in 1835, "His grave-stone is the oldest in the town."5
His will, 29 Dec 1640, speaks of sons and daughters and leaves the care of all to wife Sarah, whom he names sole executor, with overseers Thomas Flint, Simon Willard, and Robert Merriam. In an unusual provision, Joseph stipulates that should his widow remarry, she shall nevertheless have the widow's third of his estate.1,2 The widow did remarry, probably in the latter half of 1642, to Lt. Joseph/1 Wheeler, with whom she had two daughters.6,7
See Pope, Merriam Genealogy, 32-36.2

Lt. Joseph/1 Wheeler was baptised 18 Feb 1609/10 at Cranfield, Bedfordshire.1 Bequeathed, in his father's will of 7 Dec 1627, "the said Capitall messuage or tenements with all houses edifices buildings yards gardens pightals groundes comons pfitts & apptenances thereto belonging." He was furthermore instructed to pay two legacies from the estate, and for that purpose given "to his use Twelve acres of Coppie hold land." Additionally left "one fframe hovell standing in the yard at my messuage at the towne end the old Cart & ould wheeles & a dung Cart."2
He married (1), say 1635 in England, Elizabeth (–?–).3,4,5 "In a deed dated 19 February 1637/8, Timothy, Joseph and Ephraim Wheeler, yeomen, of Cranfield, sold two and one half acres of 'Ferry Field' to Edward Odell of The Ash at Cranfield, for 12 pounds. The land was located between that late of Thomas Reade on the north and that of William Odell on the south…They probably left Cranfield the next year for Timothy and Joseph Wheeler were made freemen in Massachusetts on 13 May 1640…."6
At Concord, Massachusetts, notes Shattuck, he was "among the first settlers."7 There Elizabeth and their two sons died at almost the same time, "probably from some malignant disorder." One son was buried 18th July, 1642, followed by Elizabeth and her other son on the 19th.3,5 Joseph Wheeler married (2), probably in the latter half of 1642, Sarah/1 Goldstone, daughter of John/a Goldstone and Frances Jefferie, and widow of Joseph/1 Merriam of Concord, with whom he had two daughters.8,9
With other inhabitants of Concord he signed a petition for tax relief 14 May 1645.10 Juror, 4 Apr 165411; grand juror, 3 Oct 165412; juror, 19 Jun 165513; grand juror, 1 Apr 165614 and 7 Oct 165615; juror, 2 Apr 166116 and 17 Jun 1662.17 22 Aug 1653, Joseph wheller was one of a number of Concord signatories to an agreement to contribute an aggregate of £5 yearly to "the colledge at Cambridge," later Harvard College, for a term of seven years.18 1 Apr 1656, Ensign Joseph Wheeler and Thomas Hickerman, who had complained of Richard Smith of Lancaster for defamation, were awarded costs of 6s 8d when the defendant failed to appear to answer his summons.19
Joseph "traded with the Indians," says Shattuck, "and had a tract of land granted to him in 1660, 'especially for satisfying the Indians in their right,' extending from Nashoba land at the north end of the great pond to Chelmsford."7
Concord's 1666 tax list records Joseph Wheeler as owner of 29 lots, comprising 357 acres, on which his taxes were entirely abated.20
Says Shattuck, "Lieutenant Joseph Wheeler, by trading with the Nashoba Indians, became their creditor, and petitioned the General Court in 1662, for a grant of 200 acres at the southerly part of their plantation as payment for his debt; but it was refused. In 1669, he, with several inhabitants of Concord, petitioned for a tract of land at Pompasitticutt; and the Court appointed him, with John Haynes of Sudbury..., etc ... a committee to view it and report at their next session. This report was made May 11, 1670..." The committee found that the Indians at Nashoba had superior meadowland "and they do make but little or no use of it."
10 men, including Joseph and Thomas Wheeler, Stephen Hall, William Buttrick and Sydrach Hapgood, subsequently petitioned for and were granted ownership of the land, provided they settle it with not less than 10 families within three years, "and that a pious, an able, and orthodox minister be maintained there." 12 "foundation lots," or "rights," each comprising 50 acres of upland and 15 of meadow, were granted, to John and Samuel Buttrick, Thomas Gates, Richard Whitney (both Sr. and Jr.), Moses Whitney, Boaz Brown (Sr. and Jr.), Henry Rand, Samuel Hall, James Wheeler, and the aforementioned Hall and Hapgood. The grant was subsequently incorporated 16 May 1683 as Stow.21
Joseph's wife Sarah died at Concord 12 Mar 1670/719, and he married (3) Frances Watson.3 Lieutenant of the training band, he is said to have died after 1688, though the record of his death is not found at Concord or Stow.3,22

Signature of Geo Meriam, dated 22 Aug 1653.
George/1 Merriam, born in England "not far from the year 1603,"3 married, 16 Oct 1627 at Tonbridge, Kent, Susanna Raven.3 Named, with brothers Joseph and Robert, other siblings, and their children, in the will, 8 Sep 1635, of William Merriam of Hadlowe, Kent: To George Mirriam my son five pounds and to his daughter Mary, my god daughter, five shillings.1
George Merriam, his wife, and two surviving children emigrated to New England, probably with his brothers Joseph and Robert in 1638. "Among the 'Feet of Fines' or deeds of land in the county of Kent, A.D. 1638, Easter term, Charles I., is a conveyance by 'George Mirriam and Susanna his wife' of 'Two messuages, two barns, two gardens, two orchards, and six acres of land in Tewdley, co. Kent,' to 'Anne Towne, widow.3'"
They settled at Concord, Massachusetts, where he was admitted a freeman 2 Jun 1641.4 22 Aug 1653, Geo. Meriam was one of a number of Concord signatories to an agreement to contribute an aggregate of £5 yearly to "the colledge at Cambridge," later Harvard College, for a term of seven years.5 He is recorded, 2 Jan 1654 in the East Quarter of Concord (the part now Lincoln), whose residents were enumerated as follows: The east quarter [boundaries] by there familyes are from Henry Farweles all eastward with Thomas Brooke, Ensign Wheeler, Robert Meriam, Georg Meriam, John Adames, Richard Rice.6 Concord's 1666 tax list indicates he then lived in the East District near the almshouse.7 That year his taxes on 16 lots comprising 259 acres were abated.7 There he died 29 Sep 1675.8
His will, dated 8 Oct 1675, proved 4 Apr 1676, leaves beloved wife Susan all his moveables; to daughters Sarah Gove of Cambridge, Elizab. West of Salem, Hannah Axdell of Marlbury, Susan Scotchford of Concord and Abigail Bateman of Concord, "these sevrall parcels of land hereafter mentioned," a total of 147 acres, divided between upland, meadow, plowland, and woodland. To son Samuel my houseing and lands joyneing thereunto, totaling 56 acres of varied types of land, provided that this my son Samuel do well provide for comfortable maintenance of his mother during her naturall life, and take care for her decent buryall wn deceased. Should the widow choose to live with one of their daughters, "or any other place in Concord," then Samuel, who is to be executor, shall supply his mother with five pounds in provisions annually. Witnesses, Joseph Estabrook, Robert Mirriam, Thomas Burges.3
His widow Susan survived him. Savage says she died 8 Oct 1675, but Susan is mentioned in George's will of that date. No record of her death is found at Concord.9 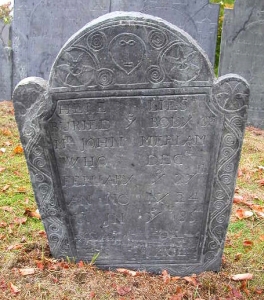