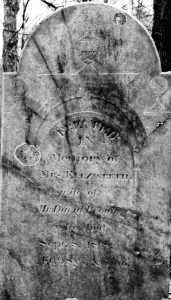 Child with an unknown spouse/person:

Woburn's First Burial Ground, as it stands today. Photo by Jan Mongoven.
Benjamin/4w Brooks, born 14 Apr 1717 at Woburn, Massachusetts,1, married (int. 5 Apr 1746, Woburn), Susanna/4 Kendall of Woburn, daughter of Lt. Samuel/3 Kendall and Elizabeth (–?–).2 13 Oct 1760, Benjamin Brooks was paid in full £28.5.7 for keeping one of the exiled French Neutral families of Nova Scotia for one year. He died at Woburn 6 Jan 1769, a. 51, "by the falling of a tree." "A jury of inquest, but all well satisfied."3,4
Buried in the First Burial Ground, where his oft-quoted epitaph reads,
Loving Husband to His Wife | A tender Parent two | Greatly lemented was His Death | By friends and kindred two. | The Lord was pleas'd to Call him Home | And by a Suding Blow | 'Twas By the Falling of A Tree | To His Long Home did Go. | And now He slumbers in the Dust | And will not rise before | The Lord the Judge descends from Heaven | And time shall be no more. | Blessed are they that die in ye Lord they Rest from their labours & their works do follow them.5
His widow married (2), 5 Aug 1771, Josiah/4 Johnson Jr.6

The Bahamian Alburys are believed to descend from Henry Albery of Locks Farm, near Wokingham, Berkshire, England. Henry died when his sons were relatively young and left instructions for the property to be sold and the proceeds divided among his heirs. His son, William Alburie, age 15, embarked from London on 30 September, 1635 on the ship Dorset, bound for Bermuda. His brother John sailed to Rhode Island and was believed to be ancestor of the Albro family. In 1650 Capt. William Alburie/Albury sailed from Bermuda to Harbour Island on the yacht Gertrude. In 1699 the Spanish attacked Nassau and killed several of its inhabitants (including William's likely son Joseph). Joseph's children, John Albree/Albury (b. 1688) and his sister Elizabeth (b. 1691), were orphaned by this event. They were taken in by the captain of a Boston vessel who brought them to Boston early in the year 1700. In May 1711 John married Elizabeth Green of Boston and they are the ancestors of the Albree family of New England.

John/1 Albree was born in 1688 at Nassau, New Providence Island, in the Bahamas, and orphaned when his father was killed, 1699, by Spanish pirates.1 He married, May 1711 at Boston, Elizabeth Green1, and was baptised as an adult 6 Sep 1713.1 His wife died at Medford, Massachusetts, 6 Dec 17512, and he 29 Aug 1758.3
In a Spanish/pirate raid on Nassau in 1699, the town's occupants were put to the sword. The only survivors, says Charles Brooks, were John and his sister Elizabeth, three years younger. They fled for protection to a cargo vessel, whose captain brought them to Boston in 1700 and took them into his family. They were put to school and John was apprenticed at the age of 14 for seven years to a Malden weaver. "His master found him a silent and thoughtful boy, and made him a good weaver." When he became of age he moved to Medford, and soon bought a small house. He operated a gristmill and weaving shop in Medford and "grew comparatively rich." His sister Elizabeth, who died unmarried, became his housekeeper.
His wife Elizabeth was a relative of Gov. Belcher of Massachusetts.1 See Charles Brooks, 520–21.4
~~~~~~~~~~~~~~~~~~~~~~~~~~~~~~~~~~~~~~~ 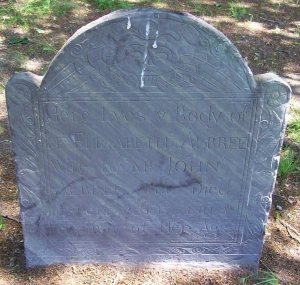