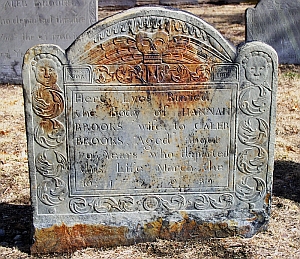 Photo by Alex Stevens (2004), courtesy Delores Tousinau.
Hannah/2 Atkinson was born 5 Mar 1643 at Concord, Massachusetts.3,1
Desoite her young age at the time, on 4 Oct 1659, Hannah and her brother-in-law John/1 Heywood were granted power of administration on the estate of William Allin, "who maried their mother [Susanna, widow of Thomas/1 Atkinson]," and were further empowered to keep the estate in their hands for their security and the discharge of a debt, due from the said Willm Allins estate to Robert Tillotson & Robert Adkinson, of Sowerby in Yorksheir, for an estate in cattle that he tooke of theirs, wch was by them comitted to the imprvement of Thomas Adkinson whose relict widow the said Willm Allin maried, the wch debt is by the said Tillotson & Robert Adkinson, made over to the daughters of the said Thomas Adkinson, with a full discharge for the same for so much recd. of their estate in England[.]2
Hannah married, about 1670, as his 2nd wife, Caleb/2a Brooks, son of Capt. Thomas/1a Brooks and Grace/1 Cunliffe, and widower of her sister Susanna.4,5 He died at Medford 29 Jul 16965,6, and Hannah signed the subsequent settlement of his estate.7 She died at Medford 10 Mar 1708/9, a. 668,5, and is buried with her husband in Salem Street Cemetery, where their beautifully carved gravestones, inscribed with elaborate skull and hourglass motifs, are well preserved.5,9 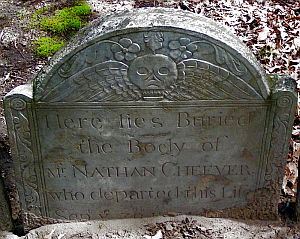 Findagrave.com, memorial #19179353. Photo by Bill Boyington.
Lt./Dea. Nathan/5 Cheever was born 16 Mar 1694 "in the old home on the County Road," North Chelsea (then Rumney Marsh), Massachusetts.2 Then of Boston, he married (1) (int. 8 Nov 1721, Boston) Hannah/4a Brooks of Medford, daughter of Capt. Ebenezer/3a Brooks and Abigail/3 Boylston, with whom he had one child.3,4 His wife died at Rumney Marsh 1 Jul 1724, a. 235, and he married there (2), 15 Feb 1738/39, Anna Burrill, daughter of Samuel Burrill and Margaret (–?–), and widow of Nathaniel Fuller of Lynn4, who died at North Chelsea 10 Nov 1740, a. 35.6
"On Dec. 29, 1738, Rev. Thomas Cheever 'chiefly in respect of the love and Affection' which he had for his son Nathan, and as he had not, previously, given him 'anything Considerable for his Subsistence, though' the son had lived with him since becoming of full age and carried on the husbandry, and also in consideration of the sum of five hundred and fifty pounds to be paid to other children of the Rev. Thomas, gave this farm in Rumney Marsh to his son Nathan."2 By an agreement among the heirs of his former father-in-law, Capt. Ebenezer/3a Brooks, 1743, Nathan Cheever received £705-6-3 in money as guardian for son Nathan Jr.7
Nathan Cheever was chosen constable of Rumney Marsh, 1726, and after the incorporation of the town of Chelsea was a selectman. Member of the Ancient and Honorable Artillery Company, 1733.2 His will, 1769, "left [son] Nathan the use of his parsonage, but in terms which show that he regarded his first-born as non-compos."4 The elder Nathan signed himself 'gent.,' and served as Deacon, Lieutenant, and Selectman."4
Dea. Nathan Cheever died at North Chelsea 30 Sep 1774 (g.s.), a. 80.1,8 He is buried with both wives in Rumney Marsh Burial Ground, Revere.9