Capt. Hugh/1 Mason was baptised 23 Mar 1605/6 at Dorking, Surrey.1 A tanner of Maldon, Essex, there he married, 13 Jan 1632 in St. Peter's Parish, Hester/1 Wells of Maldon, daughter of Thomas/a Wells and Helen Siday.2 "Of Maldon, Essex," Hugh Mason, tanner, 28, and wife Hester, 22, sailed from Ipswich, Apr 1634, in the Francis, John Cutting, master, for New England3, where they settled at Watertown, Massachusetts.3 There he was admitted a freeman 4 Mar 1634/35.4 5 Jul 1642, it was "ordered, that Hugh Mason, Thomas Hastings and John Sherman are appointed to set up a sufficient (fence) about the Burying-place with a five foot pale, and two rails well nailed, by the 15th, of 2d (7) month and the town to pay them for it."5
Hugh Mason was deputy from Watertown to the General Court in 1643, 45, 60, 61, 64, 71, 74, 75, 76, and 77, represented Watertown at a Court election, May 1644, and was lieutenant of the Watertown company, 1645-1652. 10 Jan 1647/8, Mr. Bisco, Lt. Mason and Isaac Stearns were appointed a committee "to determine the borders in laying out the Remote Meadows. At the same time a committee of seven was appointed, Lt. Mason among them, to consider the disputes "about lands in lieu of township." When Daniel Pierce brought suit in Salem against the town of Watertown in 1648, Lt. Mason was sent there to answer for the town. He was appointed commissioner to end small cases (under 20 shillings) by the County Court, 1650, 52, 53, 54, 57, 58, 59, 61.6
At a town meeting, 17 Nov 1656, it was agreed that "Capt. Mason, Left. Beeres, Ensign Shearman, Michael Bearsto, with ye three deacons should have the ordering of the sitting of the persons in the meeting house. Ould Goodman Hamond and Goodman Stratton are joyned to the same business, and the rules are, 1, office; 2, age; 3, state; 4, gifts." At a selectmen's meeting 3 Feb 1656, "it is ordered yt Captain Mason with Brother Bearsto doe goe to Sister Baall and there to acquaint her yt it is in the mind of the selectmen yt she should sett herself to the carding of two skaines of cotton or sheeps wool, and her daughter to spin it, with other business of the family; and this to be her daily taske, the which if she refuse she must expect to be sent to the house of correction."7
1652, Thomas Boyson [Boylston] makes Capt. Hugh/1 Mason and J. Stedman feoffees in trust of half of £40 per annum in the hands of his kinsman Richard Boyson of London, and half of a house in Watertown, and half of his boy's wages for keeping cattle.8 The General Court, 5 Apr 1653, appointed him captain of the Foote Companie (the "train band") in Water Towne, a position he held until his death, the training field being at the junction of Mt. Auburn and Arlington Streets.9 In 1664 the Newtowne (Cambridge) selectmen, upon the suggestion of Capt. Mason, consented that the "Watertown pond heard [herd] might pass by the side of our bounds, not prejudicing our Cow Common and Ri: Eccles and Daniel Cleaves are nominated to view the place and make returne to the Selectmen."10 He was appointed, Aug 1664, captain of a volunteer foot company, to be raised "by beate of drume or drumes in each of the townes & plantations within this jurisdiction of the Massachusetts," for the purpose of reducing the Dutch at the Monhatoes unto obedience to the English Crown.11
"At a meeting of the selectmen at Capt. Mason's 12-10-1665, the selectmen agreed that they would go two and two together to go through the towne to examine how the children are taught to reade and instructed in the grounds of religion and the capital law. Agreed Capt. Mason and John Livermore together, John Coolidge, Senior, and Joseph Tayntor together, Corporall Bond and John Sherman together."12 11 Feb 1666, Capt. Mason and Ens. Sherman were nominated, with the mutual consent of Elder Wiswall and neighbors, to view the necessity of a highway through the Elder's land, to the lands beyond towards Dedham.10
At the election in Boston, 27 May 1674, Capt. Samuel Torrey of Weymouth preached the sermon, which the General Court ordered printed, and Capt. Mason was appointed one of a committee to give the Court's thanks to the author.10

Hugh Mason clearly was a man of great stamina and vigor throughout his life, as the following account of "Sudbury Fight," which occurred during King Philip's War, when he was about 70 years of age, will indicate.
On the night of April 20 [1676], the Indians came over from Mount Wachusett and hid in the woods around Sudbury. Instead of the dawn's early light on the morning of the 21st, the people who had spent the night in the garrisons looked out upon a conflagration. The enemy had crept in and had promptly set fire to the unoccupied dwellings, and the flames were now leaping skyward.
News of the attack on Sudbury soon reached Boston, Watertown, and Concord. And the first outside help came from a rashly brave handful of armed men who hurried down from Concord. They were slain by the Indians who lay concealed in the tall grass of Sudbury's river meadow.
Captain Edward Cowell, returning to Boston with 18 troopers, was attacked a short distance from Sudbury, and four of his men were killed. The rest of the force reached the town, and soon afterward Captain Hugh Mason and his company marched in safely from Watertown, and with Cowell's troopers succeeded in driving the enemy back to the western side of the river. But the ominous sound of firing from the west could be heard. When Captain Mason led the troops across the river to give the assistance that seemed to be needed, he was compelled to retreat. It was well that he did, for otherwise the losses suffered by the English that day would probably have been heavier.13,14

Subsequently, Hugh Mason was one of three men tasked with examining losses of Sudbury's residents. They determined to allow £44.10s in abatements to their last "Ten Country Rates [tax levies] by Reason of their losses in Estates by the Common Enemy, as result of Sudbury Fight with the Indians."10

Hugh Mason's first will was dated 3 Feb 1677/78. He bequeathed his wife a third part of his housing and land, garden, orchard, etc., £20 of her choice of moveables, and an annual payment of £3 while she remained a widow. To son John he left land, houses, and barnes in Cambridge purchased of Daniel Hudson, and to daughters Hannah, Mary and Sarah £20 each. To son Daniel, "in regard of the liberal education I have given him, as also a deed of som land in England" (perhaps the Little Portland meadow in Maldon his wife had inherited), "I doe judg it an equal portion," provided that if Daniel could not gain that land in England, then he should have instead £20. Son Joseph was named sole executor and left all my housing and lands after his mother's decease, and the remainder of the estate after his mother's death.15
Five days later, on 8 Feb 1677/78, Hugh Mason drew a second will, which he did not sign. This document increased his wife's portion of the moveables to £30 and her annuity to £4 per annum. Joseph's portion was clarified as the other halfe of housing and lands for present and after his mother's decease all my housing lands with the remayning goods and debts having first discharged all my just debts.16
Hugh Mason died at Watertown 10 Oct 1678 at age 72.17 A probate deposition by the widow, undated and signed by mark, states that her husband told her that he would alter his initial will to do more for her comfort during her life. He subsequently read aloud to her this "2nd draft," and said that he made it by ye advise of his son Esterbrook. She asked her husband "if his will was firme that there might be no trouble." His response was, "Wife dost thou think that any child that I have will rise up against what I have done."18
Untotalled inventories of his estate were dated 28 Oct 1678, by John Sherman, William Bond, and Walter Hastings, and 29 March 1679 by his son Joseph Mason. That he was still active in his trade of tanning is shown by the presence of tanfats, valued at £11, and "the leather in the tanfats," worth £120-1-8.19
Hugh Mason's widow Hester died 21 May 1692.20 They are buried in Arlington St. Cemetery, where his headstone reads, Here Lieth ye Body of Capt. Hugh Mason Who Deceased October ye Xth 1678 Anno Aetatis 73 He that thus thought of Death In Lifes Uncertentie Hath Doubtless Now a Life That Bringeth Eternitie. His footstone is inscribed, Mr. Hugh Mason Capt. of ye Train Band In this Town Aged 73 Years Died October The Xth 1678. He Or Her Yt Looks Here On Live for to Learne That Die Thou Must, And After Come To Judgement Just.21,22

Benjamin/3 Peirce, born in 1649 at Watertown, Massachusetts,1, there married, 15 Jan 1677/78, Hannah/3a Brooks, daughter of Dea. Joshua/2a Brooks and Hannah/2 Mason.2 Admitted freeman of Watertown, 18 Apr 1690.1,3
He and his brother Joseph lived on his father's homestall, located "on the north side of the road from Camb., immediately west of the homestall of John Stowers, which was afterwards the parsonage, occupied by Rev. Mr. Angier."4 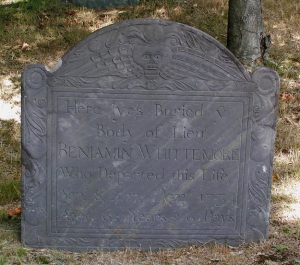