Jul 1776, the Connecticut General Assembly voted, on pressing application of selectman Brooks of Stratford, authorization for the town of Stratford to obtain 800 lbs. of gunpowder from the Doolittle powder mill at New Haven.2

John/3f Brooks was born 8 Oct 1715 at Stratford, Connecticut,1, where he married, 5 Sep 1738, Anna Sherwood of Stratfield.3 Mentioned in his father's will, 17 Dec 1745, of which he was executor with his brother David.4,5 This brother David named his own executors as brother John and son David Jr., who petitioned the General Assembly of May-June 1769 for leave to sell real estate of the testator's in the amount of £407-9-7 to pay debts over and above the value of the moveable estate.6 He is mentioned in 1772/3 as Stratford agent for tickets of the New Haven Lottery.7 He again appears, 1772–74, as bankruptcy trustee of the estates of Abijah Beach of Stratford, Gurdon Saltonstall of New London, and Ephraim Peet of Stratford.8,9 25 Feb 1774, upon request of John Brook, Esq., Stiles Curtiss, Daniel Judson and Thomas Wooster, proprietors of a township granted by Gov. Wentworth of New Hampshire to be called Maedstone [today's Maidstone, Vermont], a meeting is announced to determine the exact location of said town.10 Stratford delegate to a 1774 meeting in Middletown to discuss claims to western lands. 28 Dec of that year, appointed a committee by town meeting to ensure Stratford's compliance with "the [Continental] association."11
John Brooks died at Stratford 7 Mar 1777, aged 61-4-15.1 His widow died 19 Mar 1804.12 They are interred in the Old Congregational Burying Ground, Stratford.13 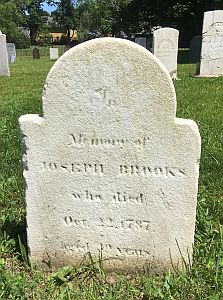 Lemuel Brooks, "a resident of Norwalk, Connecticut, at the commencement of the Revolution, was a seafaring man and while on a return voyage from the West Indies, was captured off Block Island, September 5, 1775, by the man-of-war 'Rose', conveyed to Halifax, after two months of imprisonment, made his escape and returned home."2

Lemuel/4f Brooks, born 23 Mar 1741/42 at Stratford, Connecticut,1, married, 19 Sep 1764 at Norwalk, Connecticut, where they lived, Hannah Raymond, with whom he had 10 children.3 Their 1790 census household at Norwalk included Lemuel and one other male over 16, three males under 16, and five females.4 He died 9 Oct 1815, a. 73.2
22 Nov 1837, widow Hannah Brooks of Norwalk, aged 92 the preceding day, made a declaration concerning Lemuel's Revolutionary War service to claim a pension. She stated that Lemuel Brooks, "a resident of Norwalk, Connecticut, at the commencement of the Revolution, was a seafaring man and while on a return voyage from the West Indies, was captured off Block Island, September 5, 1775, by the man-of-war 'Rose', conveyed to Halifax, after two months of imprisonment, made his escape and returned home. He took command of a privateer at New Haven, in which he made one cruise. During 1777 and 1778, he served as Assistant or Deputy Commissary under Commissary Daniel Gray, also during 1780 served as a private in Captain Uriah Raymond's company, and during 1781 as sergeant in Captain Eliakim Smith's Company on the alarm list, and was in service when Danbury, Fairfield and Norwalk were invaded."2
The claim, however, was not allowed, "as she failed to furnish sufficient proof of six months actual military service, as required by the pension laws."2 Hannah died 11 Nov 1841, a. 95.2
Their son Lemuel (Jr.) filed his own declaration the same day, in support of his mother's claim, adding considerably more detail.

My younger Days was Imployed in Different Voyages on the Water frequently with my father Brooks. He was a Strong Advocate for the Liberty of America his Ocupation was uppon the Seas & was Captured Sept. 5th AD 1775 on his Return Voyage from the west Indies in sight of Block Island by a Tender belonging to the Rose Manawar Capt. Wallace & Caryed into Rhode Island from thence was ordered to follow sd fleet to Boston but susspicion of his Intending to Make his Escape from the fleet he was taken out of his Vessel put on board a Manawar held a prisner when he made his Escape arriving home Late in November he soon after obtained a Comission Under the United States Government[.]
The son states his father then took command of a privateer fitted out at New Haven, making one cruise, from which he was chased back into port by the British. Finding that most of his crew had left him,

… he also gave her up to his Owners[.] he Returned home was Imployd in carrying Troops from Norwalk to New York until after the place was surrendered to the British Early in the year Seventeen Hundred & Seventy Seven[.] he Served as Deputy Comisary Under Daniel Gray as forwarding Comisary of provisions to the Troops on the Lines. I believe about Two Years some time in the year of AD 1779 there was an order from government that all able Bodied Men Exempt from the Militia should be Imbodied into Companys & [acquit] themselves to Stand Ready to March at Notice which was Cald Naryholders or alarm lift, Eliakim Smith was apointed Captain of the Company[.] my father Lemuel Brooks was Chosen and served as Sarjant & as such led the Company to [Hannage?] in Connecticut at the time the British made a Sally on that place he was in service when danbury, fairfield & Norwalk was invaded was once drafted to Go to Hartford to Join a Ridgement I think was Commanded by Col [Norry] while General Waterbury was Comadant at [Noyse?] Neck which was in the year AD 1780 & then Continued in the Station of Sarjant until the year of AD 1781[.]
Among the attestations to Lemuel's declaration is a brief note, to which the continuing page is missing: "I further certify that on this 23d day of November AD 1837 by actual & personal examination of books in the hands of executor of Lemuel Brooks I found a charge against William [Sizemore] Commandant of Artillery in …."2
Jul 1853, Ann Miller of New Haven, aged 77, as daughter and heir-at-law to Hannah Brooks, widow of Lemuel, gave power of attorney to Wilson H. Clark of New Haven "to investigate, substantiate, demand and receive" any Revolutionary pension benefits due her mother.2 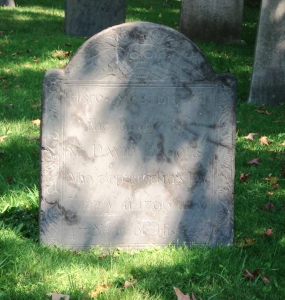