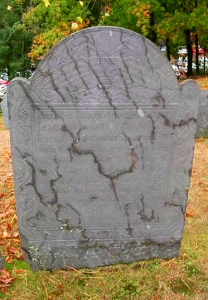 Findagrave.com, memorial #20642956. Photo by Nareen et al.
Dr. James/3 Minot, born 14 Sep 1653 at Dorchester, Massachusetts,1, studied divinity and physic at Harvard College, where he graduated in 1675.1 "He kept the grammar-school in Dorchester in 1679…" but soon relocated to Concord, where he was a teacher and physician.3 He married Rebecca/3a Wheeler, daughter of Capt. Timothy/1 Wheeler and Mary/2a Brooks.3,2
James and Rebecca Minot inherited the East District, Concord homestead of her father, where they lived and where he died.3 The will of Timothy Wheeler, 1 Mar 1686/7, names Mr. James Minot, brother Caleb Brooks, and nephew Sergeant Wheeler to see the will duly performed.4,5 20 Apr 1691, "My son Minot received 5s. and £10 he borrowed of me to purchase a piece of land with" in the will of his mother-in-law Mary/2a Brooks.5
His wife died at Concord 23 Sep 17346, and he 20 Sep 1735 (g.s.), a. 82.7 They are interred in the Hill Burying Ground8,9, where his gravestone is inscribed, Here is interred the remains of | JAMES MINOTT ESQ A M an | Excelling Grammarian, Enriched | with the Gift of Prayer and Preaching, | a Commanding Officer, a Physician of | Great Value, a Great Lover of Peace | as well as of Justice, and which was | His greatest Glory, a Gent'n of distinguished | Virtue and Goodness, happy in a Virtuous | Posterity, and living Religiously died | Comfortably, Sept. 20, 1735 Aet. 83.3,10,11

"While resident here, he was employed as a preacher in Stow in 1685, for '12s. 6d. per day, one half cash, and one half Indian corn'; and in 1686 'for what older towns had given their ministers—£13 for 13 Sabbaths.'" Invited there again in 1695, he declined. "He practiced physic, was a captain, justice of the peace, representative, and eminently a useful man," says Shattuck. "Relinquishing the clerical profession, he was appointed Justice of the Peace, and a Captain of the militia; was Representative several years, was much employed in various public trusts, and was distinguished for his talents, and for his excellent character," says Bond.
He had 10 children, all of whom married, and as a justice of the peace, had the unique joy of officiating, 13 Dec 1772, at the double wedding of his twin daughters Love and Mercy.
Of his children, "two sisters married two brothers by the name of Barrett; two other sisters married brothers by the name of Adams; a brother and a sister married a brother and a sister by the name of Lane; and two were born the same day and married the same day.
"There are few parents who have so great reason to be 'happy in a virtuous posterity,' as had these. One son was a minister, another was a deacon, and eight of the grandchildren were deacons or married to deacons; several were clergymen or married to clergymen. Very many of the great-granchildren sustained the same offices, or were otherwise distinguished in military, civil, or religious life. A large proportion of those who arrived at mature age professed religion; and the succeeding and numerous families were among the most respected, useful, and influential in the towns in which they lived. Very many distinguished men descended from them; among whom were Rev. Stephen and Hon. Timothy Farrar of New Ipswich, N.H., Roger Minot Sherman, of Fairfield, Conn., and several eminent physicians by the name of Adams; and Hon. Roger Sherman, and several other distinguished men of New Haven married descendants."3,12
The Boston Globe, 22 Oct 2008, had a photo feature entitled "25 Haunted New England Inns," among these the Colonial Inn in Concord. "When a team of paranormal experts investigated the inn," the Globe reported, "they noted several phantom presences, especially around Room 424. The room was the operating room of Dr. James Minot, who had a medical practice in the inn. In the room, the presence of a Native American woman with braids was detected. It is believed she was employed by Dr. Minot to comfort and care for his surgical patients. In addition to expert testimony, staff members have also reported paranormal experiences, including the feeling of being touched as though someone was trying to pass them. Also one of the Inn's restaurant servers told paranormal experts he was once trying to swipe a guest’s credit card when it flew out of his hand as though someone behind him had grabbed it. The card was then found in a closed cabinet."13
A 2015 Globe story on the inn's upcoming 2016 tercentennial offered additional detail. "1716 – Captain James Minot conveys the east section of the property to his son."
"On June 14, 1966, Judith Fellenz of Highland Falls, N.Y. visited the Colonial Inn on her honeymoon and stayed in Room 24 on the second floor. That night, she claimed to see a grayish apparition at her bedside."14 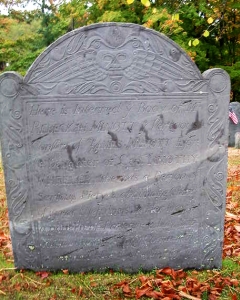 Findagrave.com, memorial #20644894. Photo by Nareen et al.
Rebecca/3a Wheeler, born about 1666 (g.s.) at Concord, Massachusetts,2, married Dr. James/3 Minot, son of Capt. John/2 Minot and Lydia Butler.1,2 Daughter Rebecca Minot was named in her father's will, 1 Mar 1686/87, and left his homestead and lands at Concord, where she and her husband lived.3,4 Daughter Rebecca Minot received one silver cupp without letters, a standing cupp and a bible with silver clasps in the will of her mother Mary/2a Brooks, 20 Apr 1691; and if God shall give her [one or more sons], Rebecca's eldest son to have all the lands in Charlestown, about 8 acres and 15 acres of marsh belonging to it, with 8 cow commons.4
Rebecca died at Concord 23 Sep 17345, and James on 20 Sep 1735, a. 82.6 They are interred in the Hill Burying Ground7,8, where her gravestone is inscribed: She was a person of | Serious piety and abounding | charity, of great usefulness | in Her Day, and a pattern | of Patience and holy | Submission under a long | Confinement, and resigned Her | Soul with Joy in her | Redeemer Sept 23, 1734 | aged 68.1,9 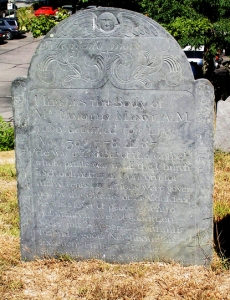 Findagrave.com, memorial #24233533. Photo by Bill Boyington.
Rev. Timothy/4a Minot was born 18 Jun 1692 at Concord, Massachusetts.1 He had been provided for, 20 Apr 1691, in the will of his grandmother Mary Brooks: "To the eldest son born of my daughter Rebecca if God shall give her one, all the lands in Charlestown, about 8 acres and 15 acres of marsh belonging to it with 8 cow commons."2 He graduated Harvard College with an A.M. in 1718, licensed, as a divinity student, to preach the gospel. But in the words of Raymond D. Wheeler, "While he officiated in a number of churches, his primary occupation became teacher, the profession he pursued for over 40 years as Concord's schoolmaster."3,4
He married (1), 9 Jul 1724 at Concord (Rev. Whiting's diary), his 2nd cousin, Mary/4a Brooks of Concord, daughter of Noah/3a Brooks and Dorothy/2 Potter.5 who died at Concord 15 Feb 1760, a. 60.6 He married (2), as her 2nd husband, 24 Nov 1763 at Sudbury, Beulah Stone of Sudbury, daughter of Daniel Stone and Patience Brown, and widow of Col. Josiah Brown.3,4 He died at Concord 30 Nov 1778, a. 867, and his widow 14 Apr 1786, a. 90.8 He is interred with both wives in the Hill Burying Ground.9,10
His epitaph describes him thus: He was a Preacher of the Gospel | whose praise was in all the Churches, | a Schoolmaster in Concord for | many years his actions were gover- | ned by the dictates of Conscience, | he was a lover of good men. | Sober, just, Temperet, a faithful | Friend, a good Neighbour, an | Excellent Husband, a tender | affectionat Parent & a good Master.11,12
"A biographical notice of this distinguished man is given in Shattuck's History of Concord, p. 244."3 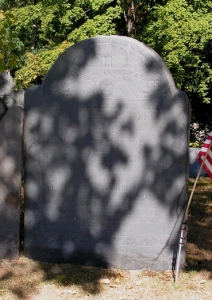 Findagrave.com, memorial #20643017. Photo by Bill Boyington.
Col. James/4a Minot was born 17 Oct 1694 at Concord, Massachusetts,1, where he married (1), 14 Nov 1716, Martha/3 Lane of Billerica, daughter of Col. John/2 Lane and Susanna Whipple, with whom he had 3 children.2 (Their siblings Capt. James Lane and Martha Minot also married.) Martha died at Concord 18 Jan 1733/34, a. 393, and he married (2), 9 Oct 1735 at Brookfield, Elizabeth/4 Wilder, daughter of Ephraim/3 Wilder and Elizabeth Stevens, and widow of Tilley/2 Merrick of Brookfield.4 He died at Concord 6 Feb 1759, a. 64.5 His widow married (3), 1763, Rev. Daniel Rogers of Littleton, and died there 13 Sep 1779.6
James Minot is interred with his first wife in Concord's Hill Burying Ground.7,8 His epitaph reads:
He was of | Honl. Descent, early improved and advanced | in Civil and Military Affairs. Divers years | Represented this Town at the General Court | was a Justice of the Peace, and one of the Hon. | His Majesties Council for many years, which | Offices he Sustained until his death. | In all which Stations and relations of life he | behaved as the Christian, the Patriot, and the | benevolent friend, and as he merrited so he | was much loved and honored in his life | and Lamented at his death. | Memento mori. | 'From death's arrest no age is free.'

Memento mori | Here lye the remains of Colol James Minot [?] who departed this Life Febr 6th 1759 in the 65th year of his age He was of Hon Descent early improv'd & Advanced in civil & military Affairs, Divers years Represented this town at the General Cor.9,10,11