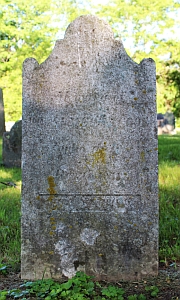 Findagrave.com, memorial #21889800. Photo by George Colclough Jr.
Maj. Simeon/4g Cook, born 18 Oct 1729 at Windsor, Connecticut,1, married Mary Lord, daughter of Ephraim Lord.2
At the outbreak of the Revolutionary War, Simeon Cook was resident at Amenia, New York, where he was captain of one of the companies in the Sixth Regiment of Dutchess County militia, commanded by Simeon's brother-in-law, Col. Roswell Hopkins.3
"When the news of the battle of Lexington reached Amenia, the military companies came together with a spontaneous will, like men who had something to do. 'They were addressed by Ephraim Paine, Esq., in a masterly oration,' in which he rehearsed the matters which had brought the country to so serious a crises, pointed to the tyrannical measure of England, intended to enslave this country, now already begun in blood, the danger of America, and that the time had come to step forth with manly courage to resist the force of lawless invasion. 'At the close of this address,' says one who was present, 'the whole audience, officers and privates, caught the flame as from an electric shock, and were ready to march to the seat of war.' Simeon Cook, Captain of one of the companies, addressed his men. 'Fellow soldiers, the time is come to give up our liberties, or defend them with the musket. As many as are willing to march with me to the scene of action, I will lead, and I will expose myself to all the dangers and hardships that you will be exposed to. If any of you are unwilling to go you are dismissed.' It is added that not one left the ranks."3
"'Captain Cook,' says Mr. Paine, 'was afterwards deservedly promoted to the rank of Major, and was distinguished for his courage and steadiness in battle near Fort Independence, in 1777." [A footnote adds,] "Mr. Paine says that Major Cook was a tall, spare man, and of singular steadiness of manner, which gave him the name among his neighbors of "old Steady".3
His house at Amenia, evidently large and commodious, was the local gathering place for political events. In the year 1780 alone, John Barr's diary tells us, Simeon Cook hosted (1) the election for Governor (25 Apr), "expenses 16½ dollars"; (2) an address by Elkanah Holmes (25 Jun), after which the militia marched upon "a Genl alarm throughout this state"; and (3) a town meeting on 25 Aug, "where the Minds of the Precinct was taken in Respect of Supporting the Credit of the New Emission, & getting a Law made to prevent the illegal Trade with the Enemy …."3
Simeon died 17 Dec 1811 (g.s.), a. 824, and his widow 27 Apr 1818.5 They are interred in the Old Amenia Burying Ground.2 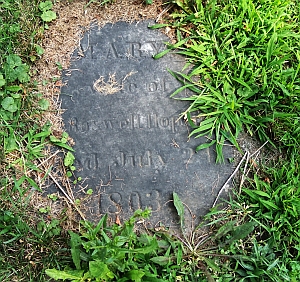