Children with an unknown spouse/person:

John/1 Ball, born in England before 16001,2, was admitted a freeman of Watertown, Massachusetts, 22 May 1650.3,4 He removed to Concord, and died 1 Nov 1655.5,1 By some accounts his wife, who seems to have died in England, was Joanna King, but contemporary records make no mention of a wife.1,2
Since John/1 Ball the emigrant lived at both Watertown and Concord, early researchers, as far back as Farmer (1829), assumed he was the father of both John (/2?) Ball of Watertown and Nathaniel (/2?) Ball of Concord. As David G. Ball points out, however, "He may have been the father of one, but according to preliminary yDNA testing, not both." Testing of descendants of both the younger men has shown they were not related.
Nathaniel lived at Concord, was made freeman at the same time as the emigrant, and named a son John; all of which makes him, in my judgment, the better candidate to have been a son of the emigrant. Regardless, I have left both younger men numbered as descendants (/2) of the emigrant for convenience in identifying the many Ball descendants who share common given names.2 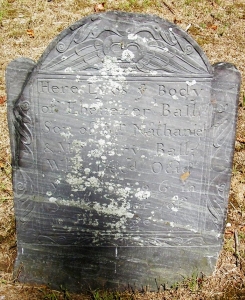