Probably the Samuel Bateman who died, 1 Nov 1690, in Cape Breton in the Phips expedition against Port Royal.2

The opening event of colonial military effort in King William's War was the expedition of Sir William Phips against Port Royal, which sailed from Nantasket, Boston Harbor, on April 28, 1690, in five ships with a force of several hundred. This Nova Scotia fort, with its small garrison outnumbered, soon surrendered, May 11, 1690, and the colonists gathered their plunder. A Congress of the colonies of Massachusetts, Plymouth, and New York voted for a combined expedition against Canada and this was the first instance of the Americans acting together in a formal undertaking against a common foreign enemy.
Here was planned a joint movement with a land force marching from Albany to attack Montreal and a fleet from Boston to move against Quebec. The plan was of interest as the movement was essayed by the colonies without proper preparation and without consultation with the English Government. The land expedition was inadequately organized and equipped, and lacking the quotas of troops promised by the colonies involved, met with difficulties from the outset. A dispute over the position of joint commander, lack of suitable equipment, and an almost entire incapacity to carry on such an expedition, among other causes, led to its collapse and somewhat ignominious return after it had reached Wood Creek near the southern end of Lake Champlain. This futile attempt clearly showed the inability of the colonies at that time to organize for successful co-operative military action independent of England, and emphasized the inadequacy of the strength of men and of equipment they could assemble.
The sea expedition against Quebec which left Boston on August 9, 1690, in some thirty-two vessels of various sorts and sizes, and aggregating some 2200 men, while it reached its destination was hardly more successful. Various delays enabled reinforcements under Frontenac to reach Quebec which was able to resist siege from a landing force and bombardment by the fleet. Not only was there lack of success in gaining the objective but the troops suffered from disease and exposure, while the cost of the expedition almost bankrupted the Colony of Massachusetts Bay. Again this costly demonstration of the incompetence of the leaders for such an enterprise outside of their own boundaries, showed that, notwithstanding the bravery of the land forces under Major John Walley, no measure of success against a foe well organized and led could be expected in the absence of trained commanders and disciplined and seasoned troops.4

Since John/1 Ball the emigrant lived at both Watertown and Concord, early researchers, as far back as Farmer (1829), assumed he was the father of both John (/2?) Ball of Watertown and Nathaniel (/2?) Ball of Concord. As David G. Ball points out, however, "He may have been the father of one, but according to preliminary yDNA testing, not both." Testing of descendants of both the younger men has shown they were not related.
Nathaniel lived at Concord, was made freeman at the same time as the emigrant, and named a son John; all of which makes him, in my judgment, the better candidate to have been a son of the emigrant. Regardless, I have left both younger men numbered as descendants (/2) of the emigrant for convenience in identifying the many Ball descendants who share common given names.11 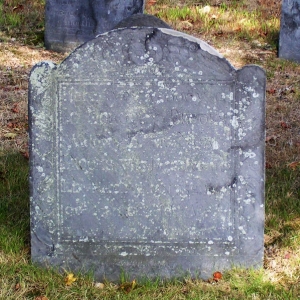 Findagrave.com, memorial #24096934. Photo by Bill Boyington.
Dorothy/2 Potter, 2nd so-named, born circa 1662 at Concord, Massachusetts,2, married, probably in 1685, Noah/3a Brooks of Concord, son of Dea. Joshua/2a Brooks and Hannah/2 Mason.
Savage and Bond erroneously identify Noah's wife as Dorothy Wright. Evidence to the contrary, and for a Potter association, is as follows: (1) The will of Dea. Luke Potter names his daughter Dorothy Brooks. (2) Luke's son Judah/2 Potter married Noah's sister Grace/3 Brooks. (3) Luke Potter was one of three men who returned the inventory of Noah's grandfather Capt. Thomas Brooks.3,4,5 Daughter Dorothy Brooks, "already given to," was mentioned in Luke Potter's will, dated 11 Jun 1695.2
Noah died in that part of Concord which had become Acton 1 Feb 1738/396, and Dorothy died 15 Mar 1752 (c.r.)7 They are interred in the Hill Burying Ground, Concord.8,9,10