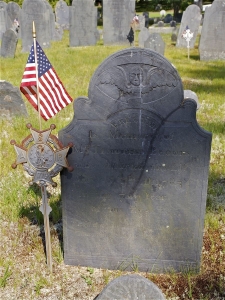 His wife and three of their children were "slain by the enimiee Sept. 16, 1696" at Deerfield. Daniel was taken captive and carried to Canada, from whence he was subsequently ransomed.1

Daniel/3 Belden married, 10 Nov 1670 at Hatfield, Massachusetts, Elizabeth Foote.2 By 1675 he had a lot 16 rods wide on the highway to the river.3 In the town's second division, he had lot no. 29, width 12 rods, 9 ft., 6 in.4
At Hatfield he acquired as a neighbor, after Philip's War, William Bartholomew, who in 1685 sold him half his twenty cow commons and two-thirds of his house lot at Deerfield, whence Daniel removed.5 There his wife and three of their children were "slain by the enimiee Sept. 16, 1696," while Daniel was taken captive and carried to Canada, from whence he was subsequently ransomed.1
He married (2) Sarah Hawks, daughter of John Hawks, and widow of Philip/1 Mattoon of Deerfield.6 19 Dec 1698 at Hatfield, "a contribution was made for Daniel Belden and Martin Smith, who had been reduced to straits by their captivity in Canada after the attack on Deerfield in 1696."7 He is probably the D.B., "head of family," who died at Deerfield 14 Aug 1732.8

Child with an unknown spouse/person:

Esther/3s Brooks was born 15 Sep 1716 at Deerfield, Massachusetts.1 She had a natural son Benjamin Hoxton/4s Brooks at Springfield, 1735.2 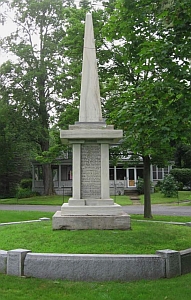 Zebediah Williams, who married, as her 1st husband, Mary Miller1, died 18 Sep 1675 at "Bloody Brook," near Deerfield, Massachusetts, when a force of 80 soldiers and 18 teamsters under Captain Thomas Lothrop, sent to gather the English corn harvest at Hadley, was ambushed by a much larger force of Indians during Philip's War.2 The dead Englishmen were buried in a mass grave in what is today South Deerfield Village.3
His son Zebediah Jr., and daughter Mary and her husband, Nathaniel Brooks, were taken in the raid on Deerfield, 29 Feb 1703/4, and embarked on the forced march of captives to Canada which followed. Mary was killed enroute; Zebediah Jr. survived the march but died in Canada in captivity. Nathaniel Brooks survived to be ransomed and return to Deerfield.4